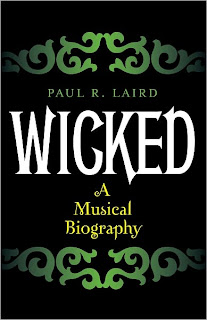 Description per Scarcrow Press:
In 2004, the original Broadway production of Wicked earned 10 Tony nominations, including best musical. Based on the best-selling novel by Gregory Maguire, the show continues to run on Broadway and has touring companies throughout the United States and around the world. In Wicked: A Musical Biography, author Paul Laird explores the creation of this popular Broadway musical through an examination of draft scripts, interviews with major figures, and the study of primary musical sources such as sketches, drafts, and completed musical scores.

Laird brings together an impressive amount of detail on the creation of Wicked, including a look at Maguire's novel, as well as the original source material, The Wizard of Oz. This volume also offers a history of the show's genesis along with examinations of the draft scenarios and scripts that demonstrate the show's development. Laird also explores Stephen Schwartz's life and work, providing an analysis of the composer and lyricist's work on the show through song drafts, sketches, and musical examples.

Laird also surveys the show's critical reception in New York and London, noting how many critics failed to appreciate its qualities or anticipate its great success. The unusual nature of Wicked's story--dominated by two strong female leads--is also placed in the context of Broadway history. A unique look into a successful Broadway production, Wicked: A Musical Biography will be of interest to musicologists, theatre scholars, students, and general readers alike.
About the Author:
Paul R. Laird is professor of Musicology at the University of Kansas, where he teaches courses in music history, musical theater, and directs the Instrumental Collegium Musicum. He is the author of The Baroque Cello Revival: An Oral History (Scarecrow, 2004) and coauthor of Historical Dictionary of the Broadway Musical (Scarecrow, 2007).
http://www.amazon.com/Wicked-Musical-Biography-Paul-Laird/dp/0810877511/ref=sr_1_6?s=books&ie=UTF8&qid=1309735699&sr=1-6#_
American Greetings (Carlton Cards) Heirloom Ornament Collection
Wicked: Popular     2nd in the Wicked Series   SRP: $30.00

http://www.wickedthemusicalstore.com/
Out of Oz: The Final Volume in the Wicked Years by Gregory Maguire   SRP:  $26.99 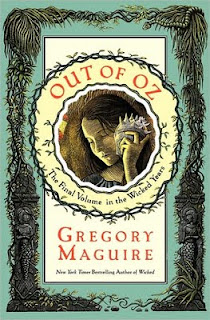