I first reported this three years ago on the original blog here.   As you can see from the post, lots of confusion, misinformation, and aggravation.  THREE YEARS LATER, she's finally in my hot little hands.  In the past week, three have shown up on eBay.  Where these are coming from I've no clue.   I found these on websites (usually after they were sold out) from Hong Kong,  the UK, and Russia.   The company, MGA, couldn't or wouldn't tell me anything about the doll.   Frustrating, yes, but I never gave up.  In general, I'm not a big fan of the Bratz dolls but the little storybook ones are cute, and it's hard for me to resist a Dorothy doll!  Despite my criticisms below, I'm THRILLED to finally have her in my collection!!!!!

Her little dress has a blue and white satin shimmery slip underneath.  The jumper part has little glittery blue polka dots and she's wearing silver slippers!!!   Unfortunately, she does not come with a Toto.  It might be hard to see in these photos but she has the prettiest violet eyes.  Her packaging is book shaped and there's a storybook attached to the back. 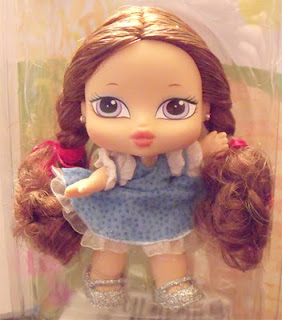 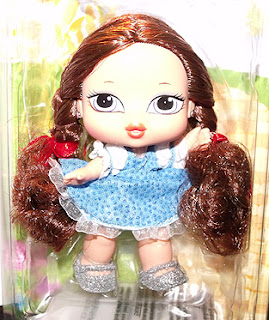 Dorothy's Lil' Joke is the attached storybook.  Other than not having a Toto, my other problem is the story.  On one page it says how kind Dorothy is and then she plays a trick on the Lion that's rather mean.  She puts a banana peel on the yellow brick road for him to slip on.  Now when I was in school we were given very stern lectures about tripping people especially on hard surfaces, like...say....brick!!!  Not a very good thing to be teaching children.  They could have spent a little more time and come up with a better story or at the very least have the Scarecrow be the one tripping because  he can't get physically hurt.  Morals aside, the illustrations are VERY cute!!  Toto is just adorable.  The Scarecrow is a bunny, the Tin Man is a frog, and I'm not sure what the lion is so I'm assuming he's a lion cub (to me he looks like a little pig). 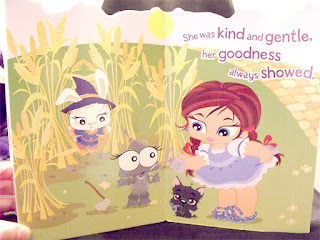 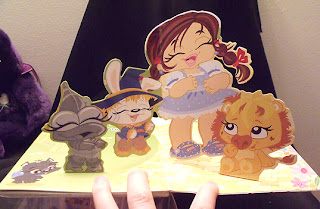 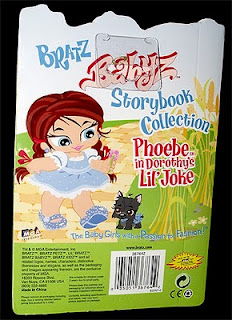