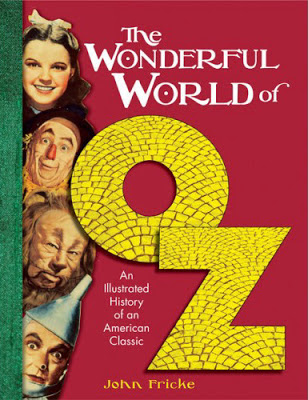 *cover art not final*
It’s the Ozzy compendium of the new millennium! In his new book, The Wonderful World of Oz: An Illustrated History of the American Classic, best-selling author and Emmy Award-winning producer John Fricke celebrates the 75th anniversary of MGM's The Wizard of Oz, along with all other aspects of L. Frank Baum's classic series of "American Fairy Tales." The deluxe pictorial chronologically travels through more than eleven decades of Oz books, productions, and memorabilia and will be published on October 1, 2013, by Down East Books.

Fricke is widely regarded as the preeminent Oz and Judy Garland historian, and his latest book makes its debut in conjunction with several major events in the greater Oz community. Foremost among these is the similarly-titled exhibition, The Wonderful World of Oz, opening on Saturday, October 12, 2013, and running through spring 2014 at The Farnsworth Art Museum in Rockland, ME. The art for the book and the items for the Farnsworth show have been drawn from the holdings of Willard Carroll and Tom Wilhite, which comprise the most comprehensive Oz collection in the world.

The Farnsworth (www.farnsworthmuseum.org) is the only nationally-recognized art museum mounting a six-month Oz anniversary retrospective. Via Carroll and Wilhite, both the exhibition and Fricke's The Wonderful World of Oz will illustratively detail the entire 114 year arc of Oz-to-date: from the publication of The Wonderful Wizard of Oz in 1900 to the 2013 film, Oz The Great and Powerful, which has grossed a half-billion dollars world-wide since its premiere in March. Highlights include such MGM collectibles as one of "Dorothy's" test dresses and original blouse; the costume of a Munchkin member of the "Lollipop Guild"; and one of the hourglasses of the Wicked Witch of the West.

Concurrent with the book and exhibition, Warner Home Video will debut (on October 1) its latest deluxe DVD release of the legendary Garland motion picture, The Wizard of Oz. For the film's 75th anniversary, the studio has remastered the 1939 musical in 3D and will market it in a variety of lavish packagings with a host of additional features. Paramount among the latter is producer/director/writer Gary Leva's new "making of" Oz documentary, in which Fricke is featured. For Warner Bros.' use, Fricke has also prepared a one-hundred point "time line," tracing the history of the MGM Oz film from preproduction in autumn 1937 to the Academy Award ceremonies in February 1940.

Among other 2013 Oz-related appearances, Fricke will serve as host and lecturer at the annual OZ-Stravaganza! festival in Chittenango, NY (hometown of Oz author Baum) from Friday, May 31st through Sunday, June 2nd. He will fulfill similar duties as "master of ceremonies of special events" at the Oz Festival in Wamego, KS, from Friday, September 27th through Sunday, September 29th. (Additional appearance information, plus specifics of The Wonderful Wizard of Oz book, are forthcoming.)
And more details per Down East Books:
Hardcover
160 pages
Releasing early October
Table of Contents:
Preface
Introduction
1900s: Down the Yellow Brick Road
1910s: The Royal Historian of Oz
1920s:An American Phenomenon
1930s: A technicolor Show of Shows
1940s: Oz Around the World
1950s: Oz Comes Home
1960s: Off to see the Wizard
1970s: Ease on Down the Road
1980s: Return to Oz
1990s: Rainbow Road
2000s: Wicked Wonderful
**please note this information is subject to change prior to publication**
About author John Fricke:  John Fricke is the author of The Wizard of Oz: An Illustrated Companion to the Timeless Movie Classic, The Wizard of Oz: The Official 50th Anniversay Pictoral History, Judy: A Legendary Film Career, Judy Garland: World’s Greatest Entertainer. He is a two time Emmy Award-winning producer for PBS American Masters and A&E biography documentaries about Judy Garland. He lives in New York City.
Pre-order from Amazon

Ryan Jay will be reviewing Oz the Great and Powerful on Blu Ray so watch his blog!!!
Posted by Sharon at 3:29 PM